"Training" is kind of a misnomer when it comes to pigs and litter boxes. What we are actually doing is using a combination of management and natural pig behavior to increase the probability of your pig eliminating in an approved area.

If your pig urinates or defecates in places you would prefer he not, take a look at your home and how it is set up. Does your pig have too much access to areas where he might eliminate (if so, use puppy gates or ex-pens to close it off)? Is he unsupervised (a supervised pig is a safe pig!)? Is his litter box large enough (he must fit into it, right?) Clean enough? Accessible enough?

Work With His Natural Behavior

Pigs often urinate while they are drinking.
Pigs prefer to not defecate near where they eat or sleep, and do seem to prefer to defecate outdoors, in the same general location. Use this information when planning a litter station. Tofu has unlimited daytime access to a fenced yard large enough for both rooting and pooping.


For indoors, I use a "Smitty pan" see photo on the left (who knew there was a name for those plastic pans that go under washing machines?)


I line this pan with puppy training pads. I buy mine at Costco-$15 for a box of 100. You can use newspaper alone, but I found that the newspaper was not absorbent enough and I had to empty the litter pan of collected urine that had seeped through. NOT fun getting it through the door and then finding a place to pour it out. 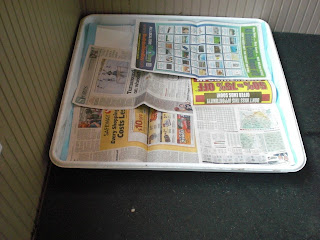 Cover the pads with newspaper-keeps my pig from shredding the pads and I can layer newspaper again and again and use the same four puppy pads for a good twenty four hours.

Place the water dish in the corner and done!

A word about training and your pig


Before Tofu came to live with us, I had read lots of articles about pot bellied pigs. Many articles included warnings regarding pig "misbehavior", like:
Well, I am not so sure about that. For years I have heard the same warnings about dogs, horses, donkey's, and goats.
What IS "Misbehavior"?

Behavior is behavior. It can be increased or decreased. Pigs (and dogs, donkey's, and goats!) "misbehave" because that behavior is being reinforced in some way. A good example is that of a well fed dog who counter-surfs when left alone. The dog has learned that yummy food is easily accessed when no humans are in the room to scold him.

So, using this model, let's say:

As you can see you have likely just reinforced your pig to squeal for food! In fact, every minute of every day you are teaching your pig something, whether you wish to or not.
The good news is, this formula can be used to increase desired behavior, too. Any behavior (desirable or undesirable) that is rewarded is likely to be repeated.


But Chris, You Have a Good Natured Pig. Try Working With A Not-So-Nice One!


Again, behavior is behavior. Not-So-Nice-Pigs have learned to react to their world differently than easy going pigs, that's all. If those not-so-nice methods do not work for them any longer (and as long as the behaviors are not self-reinforcing), they will eventually extinguish by themselves. Now, obviously I am not talking about pigs who have have learned that BITING makes the scary human go away-for any pig that has reached this level of fear I recommend a qualified animal behaviorist's advice. Common sense, people!

So What Do You Mean?

Using our squealing pig as an example, let's say that you STOP feeding when the pig squeals. If the pig is using the squeal as an outlet for frustration, that behavior has become self-reinforcing and it will likely not stop on its own.

So Then What Do I Do?

You must then replace that behavior with another in order to decrease it. If the pig squeals as a signal to you to feed him alone (and not just to make himself feel better-see above regarding self-reinforcing behaviors) and you don't feed him, he will go through a period in which the squealing will (for a time) get even LOUDER ("Hey! Don't you hear me?!") This is called an "extinction burst".

Human Analogy of An Extinction Burst

Think of how you would likely react if your up until now very reliable car will not start tomorrow morning. Would you turn the key once and say "Oh well. Car won't start. Ho hum"

Of course not! You would try the key again. And again. And again and again, until you finally throw your hands in the air and shout "AAAAARRRGH...stupid CAR! Why won't you START?!" You might even hit the steering wheel in frustration, right?

Eventually the anger and frustration wold pass and you would begin to look for a logical solution. If you never repair the starter, you may go back to your car and try starting it again a couple of times over the next few weeks/months/days, but eventually you would give up completely.

When we witness our pet going through an extinction burst we first of all do not recognize it for what it is because it stresses us out - no one likes to see their pet uncomfortable. We react to this outburst by thinking "Stubborn PIG-stop squealing!" It is a tough period of adjustment for both you and the learner, but...


This Too Shall Pass

Now, it is very important that during that period of extinction and afterwards that you never, never give in and repeat the reinforced behavior. If you do, you have just taught your pig that he must squeal for _____ minutes now, in order to get the food (or, reinforcement).

Do not learn this the hard way, trust me!

And granted, pigs, people, and dogs have individual personalities. Some are more easy-going than others. BUT-this I know for certain:

If you respect your learner (that means being aware of what frightens him-a frightened animal may bite-that is normal behavior), and you control all of the resources, and you are very careful about what behaviors you reinforce, you stand a good chance of having a well mannered pig. This, of course, assumes that your pig is in sound physical and mental health. Undoing years of poor training and unpleasant associations is not an easy task, to say the least, and a pig in pain due to illness or injury can be expected to be a bit cranky (just think how nasty a simple cold can make us!)